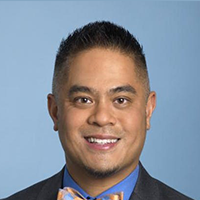 Michael Belarmino is Senior Policy Advisor of GFOA’s Federal Liaison Center, Michael leads coalition and grassroots advocacy efforts in the areas of public pensions, internet sales tax, federal preemption legislation and healthcare reform. Additionally, he supports the FLC’s Director on legislative and regulatory advocacy related to tax reform, infrastructure investment and federal appropriations and budget legislation. He also serves as staff on GFOA’s CORBA Committee and GFOA’s Black Caucus. Prior to joining GFOA, Mr. Belarmino was an Associate Legislative Director for Finance, Pensions and Intergovernmental Affairs at the National Association of Counties (NACo). At NACo, he was responsible for all policy development and lobbying for the association in the areas of municipal finance and tax, elections, pensions and county and tribal government relationships. He also served as Associate General Counsel for NACo.

Belarmino has a BBA in Computer Information Systems from Georgia State University and a JD/MBA from Western New England University. He is a Member of the Pennsylvania State Bar.